The Czech Republic took an important part in the India International Film Tourism Convention (IIFTC), which took place in Mumbai on March 1-3 2018. It was among the countries that attracted filmmakers from Bollywood and other Indian studies, that they just chose the Czech Republic as the venue of their films.

Participation at the Convention was implemented as a joint project between the Embassy of the Czech Republic in Delhi, the Czech Tourism Authority - CzechTourism and the Czech Film Commission within the framework of the Ministry of Foreign Affairs Support of Economic Diplomacy (PROPED).The Czech Republic was presented in Mumbai through a well-designed exhibition stand, prepared by CzechTourism, and a series of meetings with production companies. The uniqueness and quality of film locations were presented in a block designed for participating partner countries. Czechs also took an advantage to appear on the stage in the masterclass with the director Imtiaz Ali, well-known also in the Czech Republic.The intensity of the Czech approach to Indian filmmakers highlighted the personal engagement of Czech Ambassador to India, Milan Hovorka, who had the honor to perform at the IIFTC inauguration gala evening, as well as the Head of the Czech Film Commission, Pavlína Žípková, who supported the destination marketing of Czech locations by presenting the potential of the Czech film industry a system of interesting incentives the Czech Republic offers to attract the attention of foreign filmmakers.Ambassador and the team also met with director and producer Shivendra Singh Dungarpur, who gained his fame for the longest film ever released in India - a seven-hour document CzechMate: In Search of Jiří Menzel, which is about a film stream called Czechoslovak New Wave. 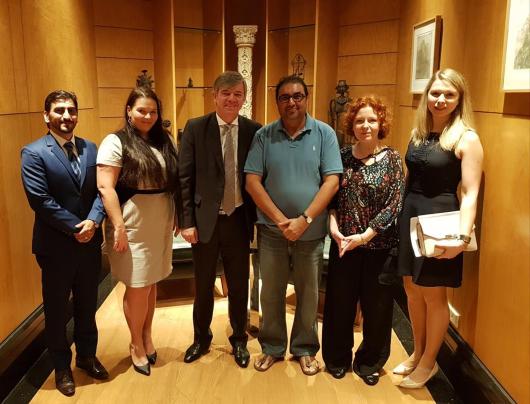 "A few years ago it was all just about Hollywood. Now, feature films such as Rockstar, Bang Bang and the latest Jab Harry Met Sejal, but also a whole range of promotional and musical pictures that have been filmed in whole or in part in the Czech Republic, confirm Bollywood's growing interest in the Czech Republic But the potential of Czech film locations is much larger, far from being just about Prague. We have countless wonderful places in the Czech Republic that we can offer to Indian production houses, "said Ambassador Hovorka, adding:"With our joint participation in the Mumbai Convention as well as in a number of other events in India, we want to meet this potential and build it further, and with the generally acknowledged synergy between the world of film and tourism, we also support the influx of Indian tourists into the Czech Republic. I am delighted that this project is successful and that the Czech Republic is one of the most popular European destinations for Indian tourists. I thank both agencies for exemplary representation and great cooperation. "